4 years on, Japan's tsunami victims remain frozen in their tragedy 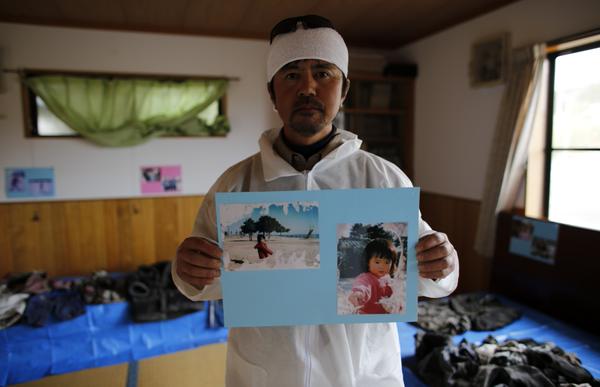 In cold drizzle Takayuki Ueno combs a desolate winter beach for the bones of his three-year-old son, unable to move on in his grief until he finds the remains of a boy killed by Japan's monstrous tsunami four years ago.

Only the ageing of his daughter, born six months after disaster struck, marks the passage of time for a man who can find no closure until he finds the bodies of the dead -- one of thousands of living victims of a disaster that is still playing out.

"My daughter Sarii will start going to kindergarten this April, start doing things that her brother couldn't," he said.

"I can't help thinking how short his life was, only three years."

March 11, 2011 is engraved on Japan's collective psyche; the day a
terrifying 9.0 magnitude undersea earthquake sent the ocean barrelling into the coast.

They also set off the worst nuclear catastrophe in a generation, pushing reactors at Fukushima into meltdown and spewing a pall of invisible -- but toxic -- radiation into the air, leaving a vast area out of bounds.

"No one came here to help. I was the only thing moving in this whole area," Ueno, 42, told AFP on the barren shore at Minamisoma, on Japan's northeast coast.

"As soon as the first reactor explosion hit, everyone disappeared. So I started searching for the missing by myself," he said.

"We desperately needed help, with so many people missing. But no one came. It was 40 days after the tsunami -- April 20 -- when troops came to search," Ueno said.

"It was the nuclear accident. That's why they came so late and left so quickly."

The body of his eight-year-old daughter Erika was found close to the family home, which lies slightly north of the 20-kilometre (12-mile) exclusion zone thrown up around the battered plant. His dead mother, 60, was also found nearby.

By the end of March 2011, Ueno and a small band of volunteers braving the radiation had worked their way through the gutted shells of broken buildings to the beach, where they chanced upon seven bodies almost immediately.

Over the following months, they discovered several dozen more corpses. But three-year-old Kotaro was not among them.

"I could hold Erika and say I am sorry," he said. "I've wanted to gather Kotaro too in my arms and say sorry. I've wanted so much to find him."

Ueno is one of thousands of people afflicted by the tsunami unable to turn the page on the horror of 2011. For them, grief is frozen in time because they cannot find the bodies they need to mourn.

For others, who may have lost no-one to the waters but were made homeless by the disaster, there are other challenges.

While the exclusion zone around Fukushima Daichi has shrunk, tens of thousands of people remain unable to return to their homes because of worries over elevated radiation levels there.

"There has been considerable progress in overall recovery from the
devastation," said Tadateru Konoe, President of the Japanese Red Cross (JRC).

"However, there have been critical delays in rebuilding communities. Particular attention must be given to the needs of many elderly and other vulnerable people who have been unable to get back on their feet."

The JRC says while many of the large-scale facilities such as hospitals or nursery homes are finished, there is a go-slow on the rebuilding of permanent homes for the displaced, who live in temporary housing, or are crammed in with relatives.

"Whereas the living conditions of younger generations have by now mostly returned to normal, the situation is more serious for a large number of elderly people who lack a supporting family network and have not yet been able to restore their lives," the organisation said in a statement.

For Ueno, the invisible poison of the battered nuclear reactors hangs over his head like a cloud as he gropes for an end to his personal tragedy.

On a miserably cold morning a few days ahead of the fourth anniversary of the tsunami, he and several others scoured a beach 17 kilometres from the stricken plant.

"Late last year, a human body was found in this area, the upper body and lower body severed," Ueno said. "But the head is still missing."

There are occasional glimmers of hope; DNA tests on bone fragments found in nearby Namie last November were identified this week as belonging to a 13-year-old girl, missing since the waves swept in, the Asahi Shimbun reported.

Despite knowing that he has been exposed to fallout from the plant, he will not stop.

"Somebody needs to do this, walking along the shore, otherwise there is no possibility that anyone will be found," he said.