4 bombs in Nigeria kill at least 50 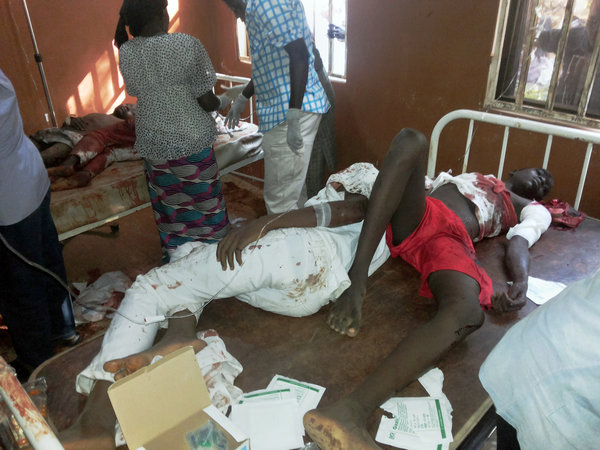 Four bomb blasts killed at least 50 people in Maiduguri in Nigeria's northeast on Saturday in the worst attacks there since Islamist militants tried to seize the city in two major assaults earlier this year.

There was no immediate claim for the bombings but they bore the hallmarks of the Islamist group Boko Haram, which has been waging a six-year insurgency to carve out an Islamic state in Africa's biggest economy.

President Goodluck Jonathan, who is seeking re-election on 28 March, has been heavily criticised for failing to crush the group. The vote was postponed for six weeks from 14 February for security reasons.

Around noon on Saturday, the driver of a motorised tricycle detonated a bomb when the vehicle was prevented from entering a fish market on the Baga road in the west of Maiduguri, market trader Mohammad Ajia said after fleeing the scene.

Another blast hit the busy Monday market shortly afterwards. A car bomb exploded later by a bus station near a Department of State Security (DSS) office, according to a civilian member of a joint task force.

State police commissioner Clement Adoda said via text message there had been four blasts in the city, without elaborating on the location or nature of the fourth explosion.

The number of wounded was well above 36 as more had been taken to two other hospitals, a hospital source said.

‘Men from the anti-bomb squad came a few minutes after the blast to comb the scene ... I saw five mangled bodies being put in vehicles,’ Aliyu Musa, a resident near the DSS office, said.

Maiduguri is the capital of Borno state and birthplace of Boko Haram, which has long coveted the city as a capital for the state it wants to create. The militants tried to seize Maiduguri at the end of January and again in early February.

Boko Haram overran a territory the size of Belgium last year, which Nigeria's ill-equipped army has struggled to take back, and the group gained worldwide notoriety in April when its members kidnapped more than 200 schoolgirls.

Since the election delay, Chadian troops cooperating with the Nigerians have reclaimed some important towns in Borno. The army has also been able to push the militants out of some territories in neighbouring Adamawa and Yobe states.

‘With the capture of Mafa, Marte LGAs (local government areas), and the Chadian troops holding fort in Dikwa, the international route from Nigeria, Cameroon, Chad and Central African Republic is now fully secured,’ Colonel Sani Usman said in a statement.