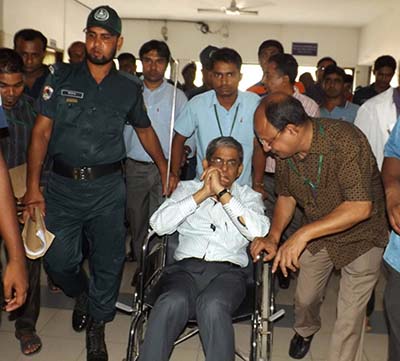 Mentioning that Fakhrul has been ailing with different health complications, including diabetes, high blood pressure and cardiac disorder, Rahat Ara Begum in her writ petition sought for the HC’s order to admit her husband to Bangladesh Institute of Research and Rehabilitation in Diabetes (BIRDEM) Hospital for his treatment.

Barrister Mahbub Uddin Khokon and Barrister Ehsanur Rahman argued for the petitioner during the hearing on Monday while Attorney General Mahbubey Alam represented the state.

Talking to reporters after the hearing, Barrister Ensanur Rahman told reporters that the court has issued a rule asking the authorities why Fakhrul should not be taken to BSMMU and given the proper treatment.

Fakhrul has been accused in various cases including the ones for subversive activities.

On 6 January, police arrested Fakhrul from in front of the Jatiya Press Club in