Khaleda Zia says "we are not anti  India and Hindu" 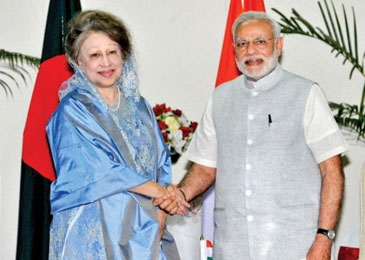 Will she or won't she, that was the question. With just a day to go to Prime Minister Narendra Modi's maiden visit, Bangladesh Foreign Minister Abul Hassan Mahmood Ali publicly stated that there would be little scope for a meeting between the Indian PM and former Bangladesh PM Khaleda Zia. Within hours of that statement, however, Indian Foreign Secretary S. Jaishankar spelt out in no uncertain terms in New Delhi that a meeting with Begum Khaleda Zia was very much on PM Modi's cards.

Sourav Sanyal caught up with BNP chairperson and former Bangladesh PM, Begum Khaleda Zia at her Gulshan office in Dhaka just hours after she met PM Modi. In a freewheeling chat that followed, Khaleda Zia opened up on her stand vis-à-vis PM Modi, India and the alleged propaganda campaign that has been mounted against her party to paint her in anti-India colours. Excerpts:

Q: Begum Zia, how was your meeting with Prime Minister Narendra Modi?

A: It was a very satisfactory meeting. It was wonderful meeting Modiji. I must say that the meeting was held in a very cordial manner. I was very satisfied.

Q: What are the key issues that you discussed?

A: As I said, the meeting was extremely cordial and was a good one. It was a one-on-one meeting, you see. I cannot really spell out what all we talked about, but it was definitely a very satisfactory meeting.

Q: Till the last moment, everyone seemed to be sceptical as to whether the meeting would actually happen. When finally you arrived at the Pan Pacific Sonargaon Hotel, did the confusion end? What led to this confusion?

A: What was the confusion all about? Did I for once say that that I wouldn't meet Modiji? I had personally congratulated him on his electoral victory. Did you hear a single leader from our Bangladesh Nationalist Party say that I wouldn't meet Modiji? Modiji is the leader of the world's largest democracy. He is here in Bangladesh with an aim to strengthen ties between two countries. The confusion was deliberately created to send out wrong signals and they tried their level best and virtually left no stones unturned to ensure that my meeting with Modiji didn't happen.

Q: Madam, are you then alleging that there was a concerted conspiracy to keep you out of PM Modi's itinerary in Bangladesh? Who was behind this?

A: Let me state the facts straight. Bangladesh Foreign Minister Abul Hassan Mahmood Ali publicly ruled out "any possibility" of my meeting PM Narendra Modi during his stay in Bangladesh. But then New Delhi put out the facts straight. On the eve of the Prime Minister's visit and just hours after the statement from Bangladesh, Indian Foreign Secretary S. Jaishankar said in New Delhi that it was very much on and would happen. How can you justify this? I am thankful to the Indian authorities as this government in Bangladesh tried whatever they could to see to it that the meeting did not happen. They did not want me to have any discussion with Modiji.

{
‘Did I for once say that that I wouldn’t meet Modiji? I had personally congratulated him on his electoral victory... There is a well-oiled propaganda machinery (in Bangladesh) that works relentlessly to project me and BNP as anti-India.’
Q: Let me then ask you a straight question then. As you are indicating, possibly a ploy was hatched by the ruling government to ensure that your meeting with PM Modi never happened. But then if we rewind to the time when President Pranab Mukherjee was in Bangladesh in March 2013, you chose not to meet him...

A: I am glad you asked me this question. Yes it is a fact that I could not meet President Pranab Mukherjee during his state visit to Bangladesh. Jamaat-e-Islami had called a general strike then to protest the conviction of its three top leaders for the 1971 war crimes. I had to call off my meeting with the President then as we received inputs that had I gone there to meet him, I would have been attacked. In fact there could have been a life threat. And if you recall, at that very spot near his hotel which I was supposed to cross, there was a petrol bomb explosion.

Q: But Jamaat-e-Islami is your alliance partner. Why would they have attacked you?

A: Precisely, that is the point. Had anything happened to me, the entire blame would have been pinned on Jamaat. And that is what the game plan was of our opponents, which we understood and the meeting was called off. Today I am sharing with you the real story.

Q: Begum Zia, you just put out your point of view as to why you didn't meet President Pranab Mukherjee in Dhaka. But to the world outside that was perceived as yet another manifestation of your anti-India stand...

A: Why should I be anti-India? See this is what I was trying to tell you. There is a concerted propaganda by the ruling government to try and paint me as anti-India and anti-Hindu. India and Bangladesh have had very strong bonding and we recognise full well the contribution India made for our liberation. Prime Minister Modi's visit is aimed at strengthening India-Bangla ties further. It suits them to project me as anti-India. There is a well-oiled propaganda machinery that works relentlessly to project me and BNP as anti-India.

Q: But then the Jamaat-e-Islami is your alliance partner. They are perceived to be religious hardliners and not quite pro-India in their approach...

A: Jamaat is our alliance partner and that's it. In the alliance they have to listen to the BNP. Since we are talking about these issues, let me tell you that you would be stunned to know how the religious minority population in Bangladesh, Hindus particularly, have suffered in the hands of Awami League. Their houses have been looted, land taken away ... And we are projected as anti-Hindu? We are with Hindus and for the welfare of every citizen of the country.

A reign of terror has been unleashed in Bangladesh. We are being attacked, our leaders are getting killed, nearly 20,000 leaders are missing and anyone who speaks out against the government is marked and attacked. It is worse than emergency here. And I am labelled as a Pakistani agent if I speak out. My husband Ziaur Rahman was the announcer of the Declaration of Independence. He was a Major when he revolted against Pakistan Army, can we forget that?

Q: But Begum Zia, you gave a virtual walkover to the Awami League by deciding not to contest the elections. And today you say there is a complete breakdown of law and order in Bangladesh...

A: The Awami League had earlier taken to the streets demanding that elections be held under a neutral caretaker government. We had agreed and elections happened in the past like that. But when the Awami League came to power, they changed the Constitution to suit their interests. The provision was abolished. We realised that it would be impossible to have free and fair elections in Bangladesh as they would use the entire government machinery and the police to rig the polls.

See what happened in the just concluded Dhaka city civic elections. When voters went to the polling booths, they were told to go home as their votes had been cast already. In fact, the recording of a speech made by a police commissioner surfaced during the elections, where he is clearly heard telling others how the police controlled the elections. Can we ever expect free and fair elections here?

I was personally kept confined within this very building where we are right now, for 92 days. They snapped communication lines. Pepper sprays were used, food supplies were stopped and even water at one point in time. This is the real story.

Q: What then is the way forward, Begum Zia?

A: We want free and fair elections and that is the only way forward for people's voices to be heard. The international community must look into the state of affairs in Bangladesh.