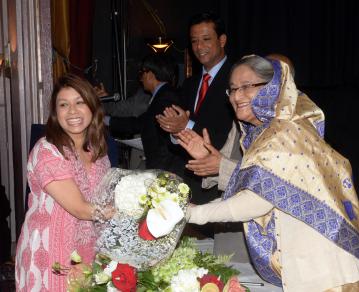 Labour Party MP and grand daughter of Father of the Nation Bangabandhu Sheikh Mujibur Rahman Tulip Rezwana Siddique has said she never thought that she would receive a bouquet from her aunt Prime Minister Sheikh Hasina from stage.

"I never thought in dream that I would receive a bouquet from my aunt after coming to the stage of such a function," she told a civic reception at the Park Lane Hotel here on Sunday evening.

The United Kingdom Awami League accorded the reception in honour of Prime Minister Sheikh Hasina for her outstanding achievements in different fields, particularly the implementation of the much-awaited Land Boundary Agreement (LBA) with India.

A number of British House of Commons members spoke briefly at the function after receiving bouquets and a book, "Unfinished Memoirs of Bangabandhu" from the Prime Minister.

At the outset of the function, a minute's silence was observed as a mark of respect to the memories of Bangabandhu and other martyrs of the August 15 carnage, four national leaders, the Liberation War martyrs and the martyrs of other democratic movements.

Tulip, also a niece of Prime Minister Sheikh Hasina, expressed her heartfelt gratitude to expatriate Bangladeshis living in the UK, saying that she would not have been elected in the British parliament without their support.

"You did lot of work....without your support and affection, I could not have come to this position," an elated Tulip said amid thunderous clapping of the audience at the function.

The Labour Party MP thanked the people of her Hampstead and Killbern constituency for coming to the function, mentioning that she won the May 7 election with a margin of 1000 votes. "There are 1000 Bangalee voters in my constituency," she said.

Referring to the election of two other Bangladeshi-origin MPs--Rushnara Ali and Dr Rupa Haque, Tulip said she is proud that three Bangalees have been elected in this year's UK polls.

Mentioning that she will go to Bangladesh in next December, she said she will first visit Sylhet and then Dhaka.

Earlier, the Prime Minister handed over a bouquet and a book "Unfinished Memoir of Bangabandhu" to Tulip.

While handing over the bouquet and the book to Tulip, Sheikh Hasina hugged and kissed on the forehead of her niece.

Other British MPs who spoke at the function highly appreciated Bangladesh's stunning success on socioeconomic fronts under the dynamic leadership of Prime Minister Sheikh Hasina.

They also lauded the huge contribution of expatriate Bangladeshis to the British politics, society and culture side by side with economy.

Speaking on the occasion, Sajeeb Wazed Joy said Bangladesh is moving forward in every sector very fast. "None could imagine that the country would advance in such a pace in last six years," she said.

Mentioning his personal dream of building Digital Bangladesh, he said there was nothing like digital in the country five/six years back. "But Bangladesh now made tremendous progress in digitization," he said.

The PM's ICT adviser said: "Our dream is big and we are taking the country forward in every sector like education, health, agriculture and development."

He said there are many things to do for building Digital Bangladesh. "Our goal is now to take the optical fibre up to the union level, set up multimedia classroom in every school and establish an ICT training centre at every university," he said.

While handing over the citation to the Prime Minister, Abdul Gaffar Chowdhury kept his hand on the head of Sheikh Hasina.

The Prime Minister in her speech thanked Gaffar Chowdhury and said his (Gaffar Chowdhury) writings always provided courage to her in different crisis moments.