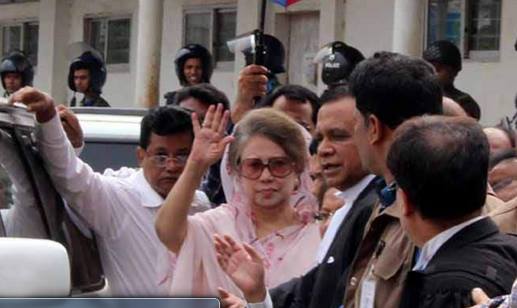 The BNP chief set out for Special Judge’s Court 3, set up in the playground of Govt Alia Madrasa in the capital’s Bakshibazar, around 9:30am from her Gulshan residence.

‘Khaleda Zia is respectful to the law and she will appear before the court on Thursday,’ saoid her media wing member Sayrul Kabir Khan on Wednesday.

Earlier on 5 May, the court adjourned till 18 June the hearing on the two graft cases against Khaleda in her presence.

On 8 August, 2011, the ACC filed the Zia Charitable Trust graft case with Tejgaon Police Station accusing four people, including Khaleda Zia, of abusing power in raising funds for the trust from unknown sources.

ACC deputy director Harunur Rashid, also an investigation officer of the case, pressed charges against the accused on 16 January, 2012.

Besides, the ACC filed the Zia Orphanage Trust graft case on 3 July, 2008 with Ramna Police Station accusing Khaleda Zia, her eldest son Tarique Rahman, now living in the UK after securing bail, and four others for misappropriating over Tk 2.10crore which came as grants from a foreign bank for orphans.

On 5 August, 2010, Harunur Rashid submitted a charge-sheet to the court in the case against six people, including BNP chairperson Khaleda Zia.