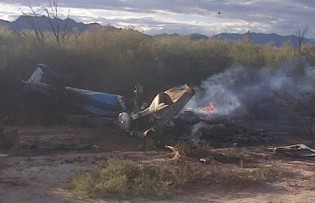 All 10 people on board both aircraft were killed.

"An explosion occurred and it's believed that they must have collided," said Angulo. "Aeronautical experts will have to determine that."

The mayor of Villa Castelli, Andres Navarrete, said the French nationals were part of a team filming the reality show "Dropped," a survivalist program with several versions across Europe.

The crew had arrived on Sunday in Villa Castelli, where it had previously filmed a version of the show for Switzerland and Denmark, said Navarrette.

"The causes of the crash are not known," Navarrete told radio station Cadena 3.

Photographs showed the burning and smoking wreckage of the helicopters on the ground with people gathered nearby.

Angulo said one of the helicopters belonged to La Rioja province and the other belonged to the neighboring province of Santiago del Estero.

The rugged, sparsely populated area is on the edge of the Andes mountain range that separates Argentina and Chile.

Several after-hours calls to various departments within the municipality of Villi Castelli were not answered.