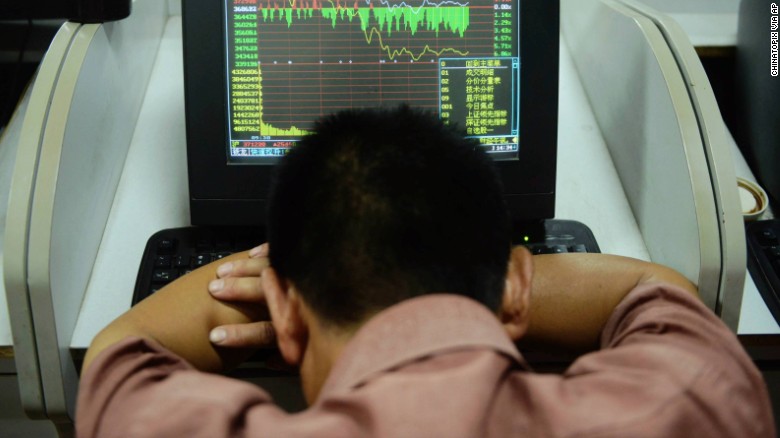 The Shanghai Composite dropped 3% at the opening bell, but reversed course and was trading 5% higher in the afternoon.

The smaller Shenzhen Composite and Hong Kong's Hang Seng were also in positive territory, with gains of around 4%.

It's the first positive sign investors have had in weeks. Since June 12, the Shanghai Composite has lost an unnerving 32%. The Shenzhen market, which has more tech companies and is often compared to America's Nasdaq index, is down more than 40% over the same period.

More than half of thecompanies traded in China have elected to pull their shares as markets continue their crazy roller-coaster ride, according to state media. The number keeps ticking upward -- on Thursday alone, more than a hundred firms announced a halt in trading.

The government is now doing everything it can to rescue the markets. The People's Bank of China has cut interest rates to a record low, brokerages have committed to buy billions worth of stocks, and regulators have announced a de-facto suspension of new IPOs.

On Wednesday, government-backed China's Securities Finance Corporation -- known as CSF -- announced that it will lend billions to big Chinese brokerage firms so they can buy more stocks. Controlling shareholders and board members were also barred from reducing share holdings via the secondary market for six months.

But investors clearly aren't convinced by government efforts. China's stock market has been undergoing wild swings, sometimes opening with a spike of as much as 7%, before ending the day down by that much.

The most compelling theory why the stock bubble burst: Chinese economic growth is the weakest it's been since 2009. Share prices got way ahead of growth and company profits, which are actually lower than a year ago.