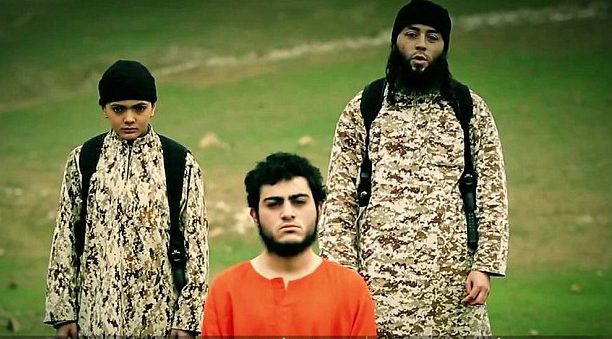 A video posted online by Islamic State militants on Tuesday showed a boy fatally shooting Muhammad Musallam, an Israeli Arab accused by the group of having signed up as a jihadi to spy for Israel's intelligence service.

The video, published by the group's Furqan media outlet, showed Musallam, 19, sitting in a room wearing an orange jumpsuit, talking about how he had been recruited and trained by Mossad. He said his father and elder brother had encouraged him.

After that, it showed Musallam being escorted to a field and then being shot in the head by a boy, described by an older, French-speaking fighter as one of the ‘cubs of the caliphate’.

Reuters could not immediately verify the authenticity of the footage, which also appeared on Twitter feeds used by Islamic State supporters.

Israeli security officials said they were aware of the video but could not confirm that it was authentic.

The video, which was about 13 minutes long, showed Musallam on his knees as he listened to the older fighter delivering the verdict in French.

Then the boy, wearing a military uniform and armed with a pistol, stands face to face with Musallam and fires one bullet into his forehead. After Musallam collapsed, the child shot him three more times and chanted ‘Allahu Akbar!’ (God is greatest).

In the video, Musallam repeated what he had said last month in an interview published by the group's English language magazine Dabiq, in which he said he had joined Islamic State to report to the Israelis on weapons caches, bases and Palestinian recruits. Israel and his family denied that he was an Israeli spy.

‘I tell my father and my son: Repent to God. I say to the spies who spy on Islamic State: You will not be successful, they will expose you,’ Musallam said in the latest video, in Arabic.

An Israeli security official had said Musallam went to Syria to fight for Islamic State in October last year.

Musallam's father has denied his son was a spy, saying a month ago that his son had gone missing while on a tourist trip to Turkey.

Said Musallam and the youth's mother, Um Ahmad, wept at their home in East Jerusalem when they learned of his death. Clutching her son's photograph, Um Ahmad told reporters: ‘A spy of 19? How is that possible? Why would he have gone there if he were a spy?’

Said Musallam said his son had been trying to return home when he was captured. He accused the militants of forcing his son to say he was a spy before killing him just for show.

‘Mohammad was told by them to say about himself that he works for the Israelis,’ Said Musallam said. ‘They took him as a victim, only to show the world, so the world would be afraid of them.’