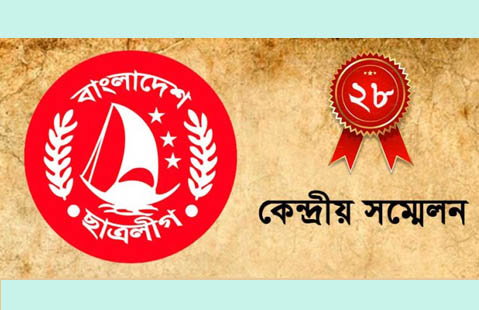 Prime minister Sheikh Hasina urged the leaders and activists of Bangladesh Chhatra League (BCL) to refrain from activities that can hamper image of the organisation. She also ordered electing future BCL leadership through direct voting.

The prime minister, also the organisational head of BCL, gave the order at the 28th national council at Suhrawardy Udyan in Dhaka on Saturday. She capped the age limit at 29 for BCL membership.

“No one will select the leadership, the councillors will elect their future leaders whoever they want…I urge you to elect those who will be able to provide right leadership-brilliant and regular students,” she was quoted by UNB as saying.
Hasina said, “Our independence came based on an ideology…so the Liberation War spirit, education and sacrifice have to be adopted by future leaders.”
Sheikh Hasina, also the Awami League president, said each and every BCL leader and activist has to grow up with the ideal encompassing education, peace and prosper, and that will be the BCL ideal.

Talking about BCL’s next leadership, Hasina said the leadership will come through an election with transparent ballot boxes introduced by this organisation first in the country.
About the 27-year age limit for the BCL leaders, she said as the council could not be held in due time the age limit should be 29 years. “But you must stick to it -- 29 years,” she said.

The last council of the BCL was held on July 2011.
The prime minister said the BCL council could not be held in due time because of movements by some political parties in the name of foiling election in 2013 that lasted for one year and also for a three-month anti-government movement in 2014-15, a UNB report said.

BCL general secretary Siddique Nazmul Alam read out the organisation’s report while office secretary Sheikh Rassel placed the condolence proposal.
Earlier in the morning, the prime minister hoisted the national flag with the national anthem being played, while the BCL president hoisted the organisation flag.
Sheikh Hasina inaugurated the council by releasing pigeons and balloons.