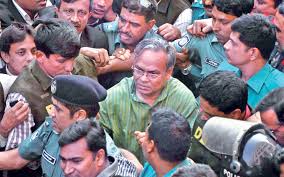 Police today produced him at court and sought to take him in for 20-day questioning in custody. Rizvi, on the other hand pleaded for bail.

Metropolitan Magistrate Shamsul Arefin rejected his bail and remand petitions and told police to interrogate him at prison gate.

The cases were filed with Motijheel Police Station for torching vehicles in front of Basic Bank Bhaban at Circular Road and Wapda auditorium on January 1 and 19 this year.

Police showed Rizvi arrested in the two cases on July 25.