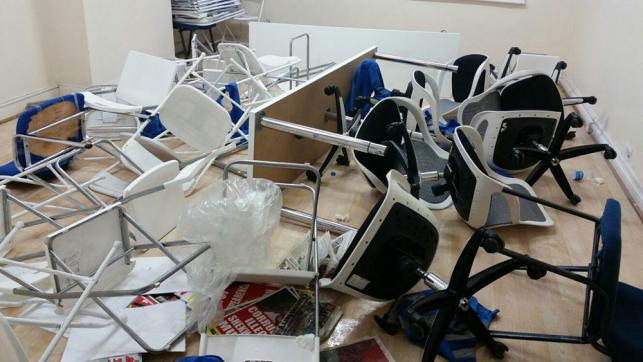 Sources said a meeting in preparation for BNP chair Khaleda Zia’s London visit was scheduled to be held on Wednesday at 7:00 pm at the party office. They changed the meeting location to Sonargoan Hotel on Brick Lane when rebel party workers started gathering in front of the party office. Later, they wrecked the office and left, breaking chairs and tables.

Sarwar Ismail Motacchir, a rebel party man of UK BNP told Prothom Alo some 10 to 15 ‘disgruntled and deprived’ party members gathered near the party office. According to Motacchir, upon being told by BNP vice president Abdul Hamid that the meeting had been cancelled he went back home. It is only upon returning home that Motacchir learned about the vandalism on Facebook.

When contacted, Kaiser M Ahmed, general secretary of BNP UK wing, told Prothom Alo he knew nothing about the vandalism.

He claimed the office always remains open and no meeting was scheduled that day.

He added that someone probably got into the office and messed up the chairs and tables.