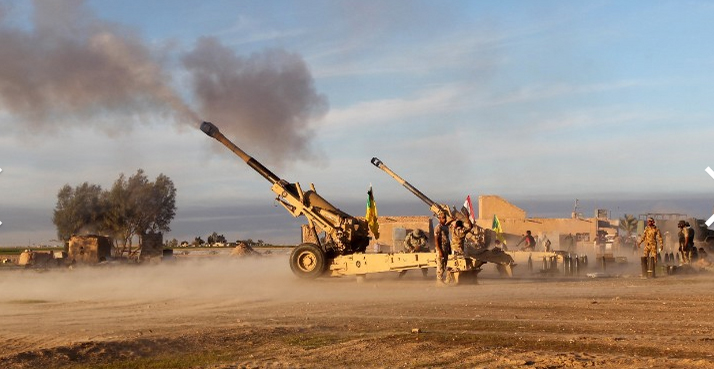 The predominantly Shia militia has been working with Iraqi troops as well as Sunni fighters to try to regain Tikrit from ISIS.

The hospital is a few blocks south of the presidential palace.Tikrit, best known to Westerners as the birthplace of former Iraqi dictator Saddam Hussein, fell in June to ISIS, which has captured large areas of Iraq and Syria for what it says is its Islamic caliphate.

ISIS wasn't making it easy, however. The Sunni extremist group blew up a key bridge near Tikrit, preventing the joint Iraqi forces from using it to cross the Tigris River to approach the city from the east.

Nevertheless, forces have made progress, forcing ISIS fighters to retreat toward the city center from frontline positions, Hashd Al-Shaabi's media office said.There have been several failed attempts to recapture Tikrit since the second half of 2014. If Iraq regains control of the city, it could mean that retaking Mosul -- a city 10 times bigger -- is possible.

The Tikrit offensive involves around 30,000 fighters.

Also assisting is Iran, which has provided advisers, weapons and ammunition to the Iraqi government. According to the Pentagon, Iranians may be operating heavy artillery and rocket launchers as well.

Gen. Martin Dempsey, chairman of the U.S. Joint Chiefs of Staff, told a hearing of the Senate Foreign Relations Committee on Wednesday that the consensus was that Iran's involvement was positive in military terms. "Anything anyone does to counter ISIS is in the main a good outcome," he said.

But at the same time, Dempsey said, the United States is concerned about what role Iran might seek in the longer term once ISIS is defeated.While Iraqi forces piled the pressure on ISIS in Tikrit, the Sunni extremist group continued to flex its muscles in Iraq's western Anbar province.

ISIS launched a new offensive on the city of Ramadi, west of Baghdad, on Wednesday morning, Faleh al-Issawi, the deputy head of the Anbar Provincial Council, said in a statement.

The city is being attacked "from all directions," with ISIS firing more than 150 mortar rounds and rockets toward it, he said.

Some 17 explosives-laden vehicles have been detonated at various security checkpoints and in the city center, he said. One vehicle targeted a bridge that provides access to the city from the north.

This is "the fiercest attack by ISIS" seen on Ramadi, al-Issawi said. Iraqi forces have imposed a curfew on the city.

Officials believe "this is an ISIS response to the Tikrit operation that is ongoing in the north," he added.

He said there had been 10 casualties among Iraqi forces in the area but did not specify how many were killed and how many injured.

In the 24 hours from Tuesday to Wednesday morning, there were 13 airstrikes in Iraq and two in Syria, the U.S.-led coalition against ISIS said in a statement.

The strikes in Iraq were concentrated near Mosul, Al Qaim and Falluja. There were none in the Tikrit or Ramadi areas.Elsewhere in Anbar province, Iraqi security forces have managed to wrest back most of the town of Karma from ISIS, said Sabah Al-Karhout, the head of the Anbar Provincial Council.

Al-Karhout, speaking to CNN by telephone, said 80% of Karma, about 10 miles (16 kilometers) northeast of Falluja, was now under the control of Iraqi security forces after a large-scale operation that started Tuesday at dawn.

Dozens of ISIS militants were killed in clashes with Iraqi soldiers, he said. The second phase of the operation is to clear any remnants of the ISIS force from the town and to remove any mines and bombs left behind.

Iraqi security forces were fighting side by side with Shia Hashd Al-Shaabi units and local tribesmen, Al-Karhout said.

Health officials in Falluja told CNN that the Falluja general hospital received the bodies of 25 ISIS militants killed in the Karma battle.

ISIS is also battling in many places far from Tikrit, including Syria, where the militant group is more on the offensive, according to the Syrian Observatory for Human Rights (SOHR), a London-based nongovernmental organization.

"Hundreds of ISIS militants launched a large scale offensive on Ras al Ayn, a Syrian strategic border town with Turkey on Friday," SOHR said in a statement Wednesday. "They made some advances there and seized Tal Khanzir."

Clashes are still ongoing between the Kurdish People's Protection Units (Kurdish YPG) and ISIS fighters, with dozens killed from both sides, SOHR said.