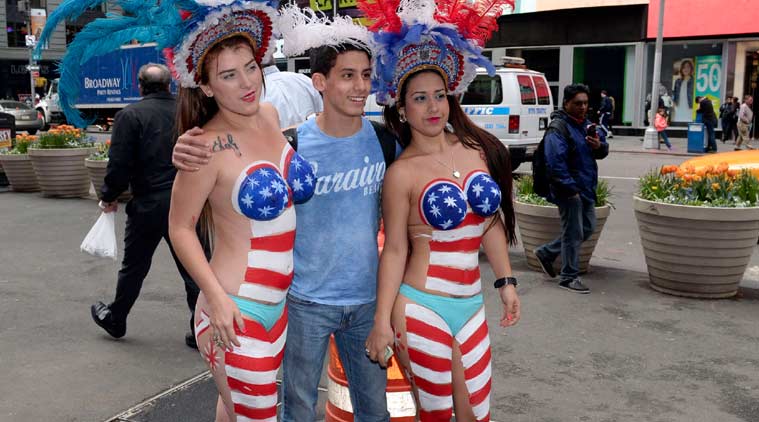 Topless women, often in body paint, posing for photos in Times Square are causing headaches for New York politicians and police who wish to regulate their presence but have no clear idea how. Frustrated politicians would like to regulate the presence of the women and the many costumed characters such as Elmo and Cookie Monster who populate the plaza. But they have no clear idea how. New York Gov. Andrew Cuomo says he believes the women are engaging in an illegal activity that harkens to the “bad old Times Square.” And Mayor Bill de Blasio this week formed a task force to look at how to regulate “aggressive solicitation.”

The experience of millions of tourists “has been diminished by the proliferation of topless individuals and costumed characters who too often harass people and expose families to inappropriate acts,” the mayor said. City officials have already brainstormed solutions that include licensing those who troll for tips or pushing them out of the square.

But the city and the Times Square Alliance, which regulates activity there, have so far taken only one step: posting notices and handing out flyers informing visitors that tips are not an obligation. Legal experts say the quandary is whether the activity amounts to a street performance protected by the First Amendment or a form of commercial activity that can be regulated.

There’s nothing illegal in New York City about going topless (with or without body paint), parading around in a furry costume or even begging for money in most places. “There’s no clear legal path to address this issue,” says New York-based civil rights attorney Ron Kuby.

“It’s hard to take two things that are legal _ being bare-breasted and begging for money _ and turn them into something illegal.” Police can do little to curb the behavior someone complains of assault or harassment. Last year, a Spider-Man figure in the same area punched a police officer trying to prevent aggressive solicitation, and a man dressed as Cookie Monster attacked a 2-year-old child whose parents had not tipped. Police Commissioner William Bratton told 1010 WINS radio Thursday that he’s looking into the labor practices of the characters, residency requirements and whether taxes were being paid.

Absolutely not.” Nicole said she used to work in music management but lost her job and couldn’t find other work in the weak jobs market. “And this is what I found. And now I love it.”