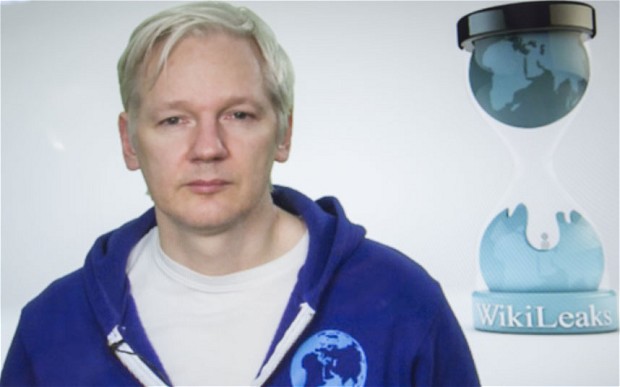 Swedish prosecutors offered Friday to question WikiLeaks founder Julian Assange in London over rape allegations, in a U-turn that could provide a breakthrough in the deadlocked case.

One of Assange's lawyers welcomed the prosecutors' proposal, saying the interview would be a first step in clearing his client who took refuge in the Ecuadorean embassy in 2012 to avoid extradition to Sweden and has been there ever since.

‘He will accept’ to be questioned in London, lawyer Per Samuelsson told AFP, adding that Assange was ‘happy’ about the development.

‘We are cooperating with the investigation,’ he said.

Britain's Foreign Office pledged its help, saying: ‘As we have made clear previously, we stand ready to assist the Swedish prosecutor, as required.’

Ecuador lashed out at the prosecutors for their delay in agreeing to question Assange at its embassy.

‘If they had accepted Ecuador's offer to question him 1,000 days ago, it would have saved us all a lot of money and trouble,’ Foreign Minister Ricardo Patino wrote on Twitter.

‘On Monday Assange will mark 1,000 days inside our embassy in London. From the first day we have offered to let (prosecutors) question him and they didn't do it,’ he tweeted.

WikiLeaks itself said the handling of the case had left a ‘black stain’ on Sweden's human rights record.

Up to now, Swedish prosecutors have refused to go to London to question the 43-year-old Australian former hacker over the allegations.

Assange has refused to go to Sweden to be questioned over the allegations, which he has vehemently denied, saying the sexual encounters were consensual.

But the prosecutor in charge of the case, Marianne Ny, said Friday she was dropping her opposition as some of the alleged offences will reach their statute of limitations in August.

Ny's office said in a statement she had always believed that interrogating Assange at the Ecuadorean embassy would ‘lower the quality of the interview, and that he would need to be present in Sweden in any case should there be a trial.’

Ny has also asked to take a DNA sample from Assange.

Sweden issued an arrest warrant for Assange in 2010 following allegations from two women in Sweden, one who claimed rape and another who alleged sexual assault.

A lawyer for one of the women urged Swedish authorities to question Assange as soon as possible.

‘For my client, possible charges must come before August,’ her lawyer Claes Borgstrom told AFP, who noted the statute of limitations in Sweden is five years for sexual assault and 10 years for rape.

Elizabeth Fritz, a lawyer for the other woman, told AFP in an email: ‘Assange did not make himself available to be interviewed in Sweden... That's why it is necessary to change the location of the interview.’

Assange fears that Sweden would pass him on to the United States, where an investigation is ongoing into WikiLeaks' release in 2010 of 500,000 classified military files on the wars in Afghanistan and Iraq and 250,000 diplomatic cables which embarrassed Washington.

A former US army intelligence analyst, Chelsea Manning, is serving a 35-year prison term for leaking classified documents to WikiLeaks.

Since Assange took refuge in Ecuador's embassy in London, British police officers have stood guard around the clock, at a cost so far to British taxpayers of almost £10.4 million (14.6 million euros, $15.4 million), according to WikiLeaks.

The anti-secrecy group slammed Swedish prosecutors for waiting so long to make the offer.

‘It is outrageous that the Swedish authorities have waited four and a half years to come to this decision,’ WikiLeaks spokesman Kristinn Hrafnsson told AFP.

‘This entire saga is a black stain on Sweden's human rights record. It is time the authorities face it and drop the case entirely,’ he said.

‘In finally agreeing to come to London to interview Julian Assange... she has waited until just before Sweden's statute of limitations nullifies her threadbare case against him,’ Pilger said.

‘She has wasted four and a half years of Assange's life -- against whom she has never had a shred of evidence to charge him with any crime.

‘Her behaviour is scandalous,’ he said.