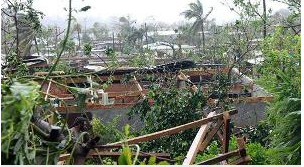 SUVA, Fiji: A huge tropical cyclone smashed into Vanuatu in the South Pacific, terrifying residents and leaving "complete devastation" with fears on Saturday that dozens of people may have died.

The full extent of the damage is unknown, with limited communications in place after maximum category five storm Cyclone Pam slammed directly into the island country with winds up to 330 kilometres (205 miles) an hour overnight.

"We could see some loss of life, potentially serious loss but we don't know yet," Sune Gudnitz, who heads the United Nations Office for the Coordination of Humanitarian Affairs in the Pacific, said.

"The feedback is that there appears to be quite widespread devastation. There is debris in the streets and widespread flooding."

The UN had unconfirmed reports of 44 people killed in one province. Save the Children's Tom Skirrow, speaking from the capital Port Vila, said: "The scene here this morning is complete devastation ? houses are destroyed, trees are down, roads are blocked and people are wandering the streets looking for help.

"Communications are down across much of the country with the total extent of the devastation unlikely to be known for several days," he said, adding that aid agencies faced a massive challenge.

Aid worker Chloe Morrison said she had spent the night in the capital Port Vila bunkering down in fear.

"There are reports from our other colleagues of entire villages being literally blown away overnight," she told Australian Associated Press.

"Local houses and leaf huts would have been picked up like confetti last night."

Unicef spokeswoman Alice Clements described the cyclone, as "15-30 minutes of absolute terror" for "everybody in this country" as it passed over.

"We have some very unconfirmed reports of casualties from the outer islands as well but we're waiting to get official confirmation on those, which is very sad news if it's true," she told Radio New Zealand.

The storm crossed the main Vanuatu island, home to more than 65,000, and a group of islands further south where 33,000 people live.

The Australian Bureau of Meteorology, which has been monitoring the storm, said most parts of Vanuatu had been affected.

The storm reportedly changed course at the last minute, passing closer to Port Vila than expected.

During the night, the administrator of the Humans of Vanuatu Facebook page wrote: "It's really bad out there. The wind is howling with a deep roar that just doesn't let up. Anyone not in shelter now is in mortal danger."

"The news reports that a communications tower on Ambrym island has fallen down. There seem to have been fatalities, but of course it's impossible to confirm just now."

Power was out in much of Vanuatu and communications were cut, although aid agency Save the Children said Pam "is feared to have caused widespread damage" and it was preparing to mount a humanitarian response.

The Red Cross was also assessing what was required in terms of food, medicine and shelter.

Aid agencies hoped to be able to start flying in emergency supplies of food, shelter and medicine from Sunday when the airport in Port Vila is expected to reopen.

Meanwhile the Vanuatu Meteorological Service has forecast "very destructive" hurricane-force winds, torrential rain and flash flooding for most of Saturday.

Fiji Weather Service meteorologist Neville Koop said the cyclone was weakening as it slowly moved away from Vanuatu, and would pass between Fiji and New Caledonia before brushing the North Island of New Zealand on Monday.

Australia's foreign minister Julie Bishop said that Canberra was ready to assist Vanuatu, and had medical and search and rescue staff on standby.

"We would be prepared to send people in, if and when required," she said.