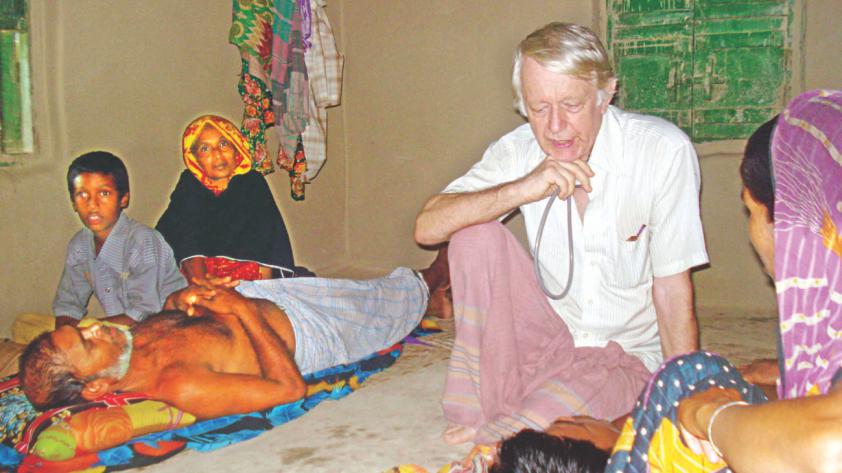 He was affectionately called “Daktar Bhai” (doctor brother). Rightly so, because he served them for decades in a Tangail village, thousands of miles away from home, to live up to his childhood promise to help the helpless.

But the doctor for the poor is no more. He died yesterday afternoon, aged 75.

“Our Daktar Bhai died around 2:15pm. He was suffering from Pulmonary Hypertension,” said Noor Amin Ratan, a close aide of Dr Edric Baker and an assistant director (programme) of Kailakuri Health Care Centre founded by the doctor.

He left behind his mother, four brothers and two sisters in New Zealand and thousands of poor patients in Tangail to mourn his death.

After the news of his death broke, hundreds of villagers, many in tears, went to the centre to pay their last respect. It was an area in mourning.

In a rare example of love and sacrifice, the lifelong bachelor had been treating poor patients in Madhupur reserved forest area in Tangail for the last three decades almost for free.

The New Zealander set up a healthcare centre at Kailakuri village of the union in 1983 and had been giving treatment and medicine to the locals.

For checkups, he used to charge Tk 5 from patients living within three kilometres of the centre and Tk 10 from those living beyond. After checkups, patients would get the required medicine from the centre whether they could pay or not.

The money to run the centre used to come from private donors and friends and family members in the US, the UK and his home country.

In an interview with The Daily Star in September 2011, he said he chose Bangladesh to realise his dream because the people here were “really good” and they did not get healthcare due to poverty. “I've chosen this country in order to give them a little health support.”

Born into a noble family in 1941, Baker obtained his MBBS degree from Otego Medical College at Dunedin in New Zealand in 1965.

He then joined a government medical team and served in war-ravaged Vietnam till 1975. He then went to Australia and England and took several courses on child health.

Baker came to Bangladesh in 1979 and joined a Christian mission hospital in Meherpur. Two years later, he moved to Kumudini Hospital in Mirzapur where he worked for eight months.

He then joined a clinic run by the Church of Bangladesh at Thanarbaid of Madhupur upazila in 1983 but soon realised that he needed to learn Bangla if he really wanted to understand his patients, many of them indigenous people. In a year, he learned to communicate in Bangla and over the years became fluent.

Finally in 1996, he set up the Kailakuri Health Care Centre where he died yesterday. It is also where he will be laid to eternal rest today according to his last wish.

When this newspaper interviewed him in 2011, he was already ill. Between May and September that year, he had undergone two surgeries.

Back then, he said he was waiting for a successor. “Many students get MBBS degrees in the country every year. I'm waiting for one of them to come and take the responsibility to provide treatment to the poor in the area.”

No one has come yet.