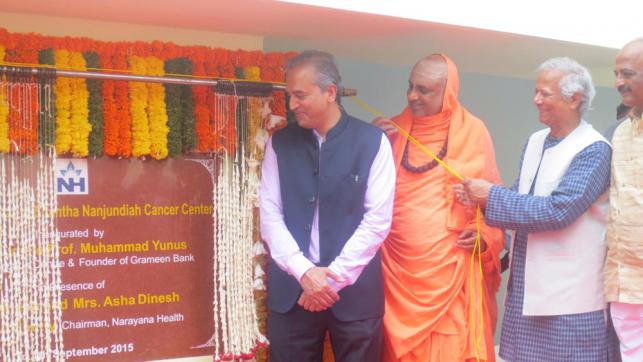 Nobel laureate professor Muhammad Yunus receiving ceremonial gifts from the vice-chancellor professor Rangappa, before he inaugurates University of Mysore's yearlong centenary celebrations.Opening the lecture series, Yunus spoke of his vision on ‘redesigning economics to redesign the world’ and an audience of 1500 persons including former ministers, eight former vice chancellors of the university, political leaders, businessmen, bankers, industrialists, NGO leaders, and graduate students listened to him.

There are over 70 Bangladeshi students at Mysore University where more than 1500 students from 60 countries are studying.

Professor Yunus was also invited by Dr. Devi Shetty, the well-known founder of Narayana Health that has built more than 32 hospitals all over India.