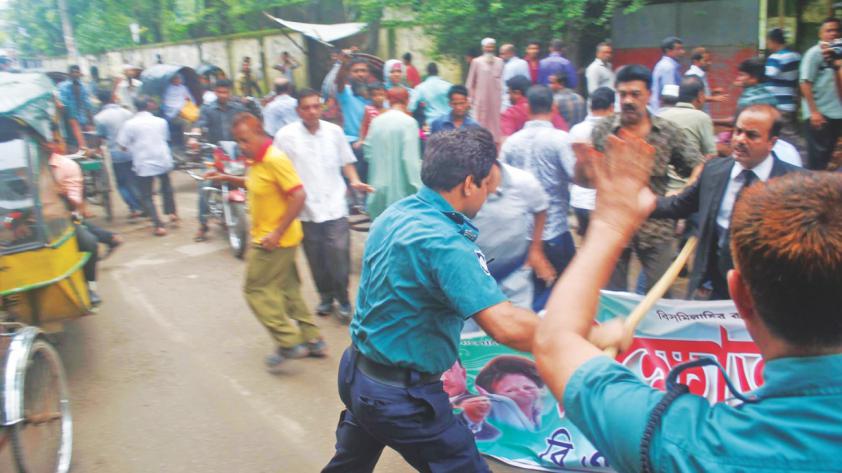 Meanwhile, the BNP and its alliance activists were not seen in demonstrations in Pabna, Feni, Noakhali, Satkhira, Narayanganj and Moulvibazar. They stayed away in fear of police action, local and central BNP leaders claimed.

In the capital, no large demonstration was noticed. However, the BNP in a press release claimed that they brought out processions in several areas in the capital, including in Banani, Dakshinkhan, Mirpur and Judge Court areas. It also said police “arrested” BNP leader Hiru from a procession in Motijheel.

The combine activists, however, staged demonstrations on a small scale in six districts --- Rajshahi, Bogra, Comilla, Chittagong, Gazipur and Chandpur.

On August 27, the government announced the hike in gas and electricity prices from September. In protest, the alliance on September 2 declared the demonstrations to be held in every district town.

This correspondent yesterday talked to 16 district correspondents of The Daily Star. Demonstrators were small in number and only the BNP men were seen there, they said.

Five BNP activists were injured, and three of them were detained by police, claimed the BNP leaders.

Abul Kalam Shahin, district (south) unit BNP secretary, alleged that when their procession was trying to go to the BNP office in Ashwini Kumar Hall area, police stopped them at Jailkhana intersection around 10:15am.

The activists of the ruling Awami League and its front organisations were never prevented from holding programmes in the city, then why the peaceful programme of the BNP activists would be stopped? he asked.

Sakhawat Hossain, officer-in-charge of Kotwali Police Station, said police acted as per directives of the higher authorities to ensure an easy flow of traffic on the streets.

The detained BNP activists would be released if they were not accused or wanted in any criminal case, the police official said.

“The BNP high-ups earlier told us that they would brief us when we would bring out processions or rallies. But they did not brief us as of 4:00pm,” a leader of the alliance, wishing not to be named, told The Daily Star.

According to the BNP press release, police also foiled the demonstrations in Rangamati and Magura.

The BNP leaders and activists could not stage the demonstrations due to police obstruction in nine districts, including Rangpur and Faridpur, the release added.

Meanwhile, Supreme Court Bar Association President Khandker Mahbub Hossain yesterday at a press conference said when the government hiked the prices [of gas and electricity], they