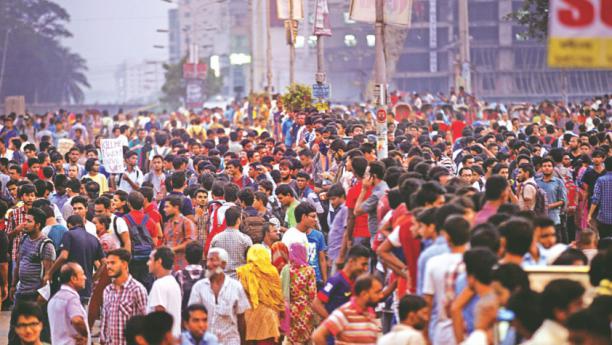 Agitating students of East West University would continue their demonstrations on Thursday in protest against imposition of 7.5 percent VAT on the tuition fees in the private universities.

Student of bachelor of business administration (BBA) department of the university Kakon Biswas confirmed this to Prothom Alo on Wednesday night.

“We will gather together first on the university premises at 9:00am Thursday. Our movement will continue until the decision of imposing VAT is revoked and members of the law enforcers who launched attacks on students Wednesday are brought to justice,” Kakon Biswas told Prothom Alo.

He said all the private universities were asked to boycott class and examinations for Thursday as part their movement.

At least 15 students of East West University were injured in a clash with law enforcers at Rampura in the capital on Wednesday when they took to the streets protesting at the government decision to impose the VAT.

Protesters alleged police intercepted their “peaceful procession” when they took to road at Rampura around 2:15pm. Initially, they locked into a scuffling that led to a clash afterwards and a chase and counter-chase took place between the students and the law enforcers.

Witnesses said police at one stage charged batons on the agitating students and fired gunshots to disperse them, leaving at least 15 students injured.

Students said one of their teachers was also injured in the police firing.

Witnesses said some 15 to 20 students sustained bullet injuries after police fired gunshots on the protesting students. A number of students took treatment at a local hospital.

Duty manager of United Hospital confirmed that additional registrar of the East West University, Mashfiqur Rahman was taken to the hospital after getting injured in the clash. He was later discharged from the hospital after taking treatment.