Cops at Rahul's home: A Q&A that raises more questions 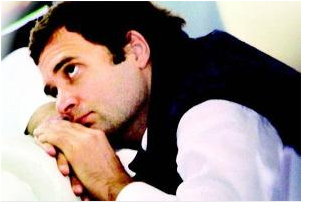 Column number 11 of a security survey pro forma of the Delhi police's secret unit (special branch) has become the bone of contention between the government and the opposition, with Congress planning to disrupt Parliament next week over what it calls the government's attempt to "snoop" on Rahul Gandhi.

The form, accessed by TOI, which is served to the dignitaries living in Lutyens' Zone, does have some rather peculiar questions or columns which may have irked Rahul Gandhi and his security apparatus.However, indicating that the details sought in the pro forma used during security audit were outdated and not in sync with time, Delhi Police commissioner BS Bassi said on Saturday that the content of the form will be looked into and suitable changes made so that nobody has any issues.

While the first ten questions are about the basic details like name and alias, place and date of birth, it's the column number 11 which is contentious.
The column, titled "descriptive roll", has sub-columns like height, build and complexion. It further goes on to seek details like the walking style (gait) of an individual, dress and even shoes worn by the person in question.

There are more columns, like the language usually spoken by the individual, colour of eyes, whether the person wears spectacles, has moustache, beard etc. It also seeks details of a close associate including his ph-one number and address and a photograph.

This pro forma is filled by special branch officers with details either given by the dignitaries themselves, if they are present, or by their staff/security. "Such details are important in many cases ... for instance, if there is any protest outside the house of any important leader, cops may face a problem in locating the house and identifying their staff without any such information," Bassi said.

Sources within the establishment agreed that such intricate details sought about public figures doesn't serve any purpose anymore as most of them are often seen on TV and newspapers.

"It could have been relevant in the times when public figures were not public, literally, and the cops needed these details to pro-vide better security. However, today they may only be a formality on paper. The restructuring of the proforma, which is decades old, is much needed," a top officer from the security wing told TOI.

The special branch usually gathers intelligence in Delhi on rallies, elections, political parties, ethnic groups, incidents like riots and also does verification for passports and other important forms.