Mass people are homeless in Vanuatu 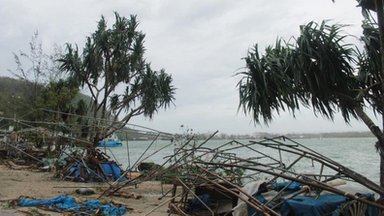 The president of Vanuatu has told the BBC most of his people are homeless after the devastating cyclone that hit the Pacific island nation on Friday.Speaking from Japan, Baldwin Londsdale told the BBC that most of the buildings in the capital Port Vila had been destroyed by Cyclone Pam.

A Red Cross spokesman described the situation as apocalyptic - in some areas, entire villages were swept away.At least eight people are reported to have been killed.However, it is feared the toll will rise sharply as rescuers reach outlying islands.Thousands of people spent a second night in shelters.

The category five storm, with winds of up to 270km/h (170mph), had veered off its expected course and struck populated areas.Vanuatu's population of 267,000 is spread over 65 islands with about 47,000 people living in Port Vila.In a statement on Sunday, Oxfam Australia said up to 90% of housing in Port Vila had reportedly been seriously damaged.

"This is likely to be one of the worst disasters ever seen in the Pacific," said Oxfam's Colin Collet van Rooyen in Port Vila."The scale of humanitarian need will be enormous and the proud people of Vanuatu are going to need a lot of help to rebuild their homes and their lives."

Immediate priorities, he said, were providing shelter, clean water and sanitation.
Port Vila's airport has been closed since the cyclone struck but officials said they hoped it might partly reopen on Sunday to allow in the first relief planes.A UN disaster assessment team is due to arrive in Vanuatu in the coming hours.