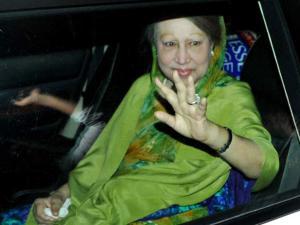 Sunday Sanaullah Miah, BNP's chief adviser, according to the UNB news agency, the Special Judge's Court -9 will appear before Judge Mohammad Aminul Islam.
Sanaullah Miah khalida a plea in the case will submit bail request.
On June 18, the High Court of corruption cases against her legal challenge Niko khalida rejected a petition filed by.
Justice md Nuruzzaman and Justice Zafar Ahmed ordered by a High Court bench comprising.
The court also two months to get a court order to surrender before the court within the former prime minister said.
ACC M Khurshed Alam Khan, a lawyer with the High Court rejected the petition in a corruption case against khalida to continue the trial and that there remains no legal bar.

On May 28, the court hearing the petition concludes.

9 December 2007, the ACC during the previous BNP Canadian company Niko an oil and gas discovery with the national exchequer due to the signing of the agreement in terms of a loss of Tk 137.77 khalida and four other corruption cases filed against Niko.

Khalida her case against a legal challenge filed a petition with the High Court.

Later on 9 July 2008, the High Court adjourned the case proceedings.