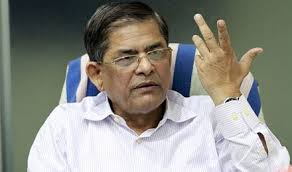 Under the leadership of Chief Justice Surendra Kumar Sinha Division Four members of the Court of Appeal after hearing a petition filed by government order.
The government in three cases of BNP leader three months '' to challenge the High Court order granting bail on November 26 filed a petition with the Supreme Court.
After the hearing of a petition primary, Appellate Division Justice Hasan Foez Siddiqui's room for a hearing before a judge Division fixing the regular court today (30 November) sent it.
Advocate Joynal Abedin stood for protection, while Additional Attorney General Mumtaz ud Fakir argued for the state.
On November 24, the High Court in three vandalism cases Fakhrul granted bail to three months.
The case of the two Motijheel police station, while another platoon had been filed with the police station.
On April 16, Mirza Fakhrul allegedly carrying out arson attacks and vandalism on January 4 regimental police station in another case filed with the High Court to secure bail for six months.
On the same day, the court Fakhrul in three other cases should not be granted bail, the authorities have issued a rule asking.
10 parliamentary election held on the day and the opposition, '' Democracy Killing Day to observe January 5 as the announcement of BNP after nearly 25 hours to stay below that came out of the National Press Club on January 6, plain Police picked Fakhrul.