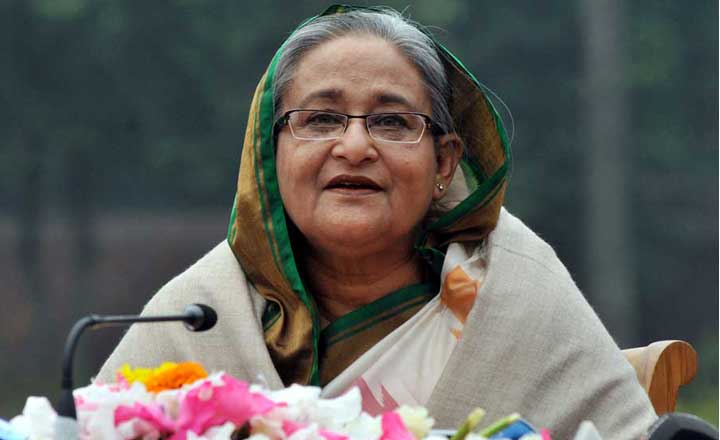 On Tuesday, Sheikh Hasina of Bangladesh Prime Minister Sheikh Hasina, police "to work on the formation of a special unit to combat terrorism and extremism is being said.

To force the government decided to create 50,000 new post.
Rajarbagh Police Line Police -2016 week during the inauguration of a program "to combat terrorism and extremism in Bangladesh to increase the capacity of the police to set up a special unit is running," he said.
Other police force to strengthen the government's commitment, the premiere of his administration ever alert to face any situation of this force that wants to develop the manpower.
"We in the way they take action in any circumstances want to train police fire," he said.
The Prime Minister said that terrorism is going on all over the world, he said. "But law enforcement, particularly in Bangladesh as police could not raise his head by the grace of Allah extremism and terrorism, remain vigilant to this end," he thanked law enforcement, he said.
Police force for the development and welfare of the various steps of the government of Bangladesh Sheikh Hasina told police the number of the current humanitarian steps his administration's head thanks to 1.50 million.
Force the number of human, we have decided to build 50,000 more posts, consider this .... in the proportion of the population is not enough, despite ". For the last seven years, including 739 cadre posts Police organogram created 32,031 posts, "he said.
The Prime Minister said that 277 cadre posts in 13,558 posts, including the recruitment of police personnel have already been completed. "To recruit more human process will be completed soon," he said.
By recruiting more human, his priority on the supply of essential communications and other equipment, the government is under active consideration, he said.
Sheikh Hasina said her government has formed the industrial police said, the Police Bureau of Investigation (PBI), tourist police, river police, special security and protection battalion. "People started to get the results of that initiative," he said.
Premier Sub-Inspector / Sergeant Post Class A class two and inspectors have been upgraded post, while his government, given by the father of the nation "IGP badge" karadita. "We provide 100 percent rations for members of the police station," he said.
So, he boarded an open jeep Bangladesh's various police forces reviewed a grand parade. He also salutes.
On the spot on arrival, the Prime Minister, the Home Minister Asaduzzaman Khan, Police (IGP) AKM sahidula rights and additional IGP Parade Committee President Mokhlesur Rahman's Inspector General was obtained.
Events, Sheikh Hasina in the last one year for their courage and bravery in serving 102 police members in four categories Bangladesh Police Medal (bipiaima) and the President's Police Medal (PPM) delivered.
23 bipiaima-service award and 40 others PPM- received the award of service, the police, 19, bipiaima awards and received 40 ppm award.