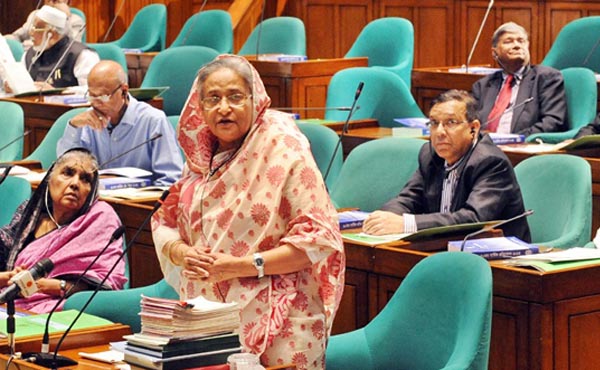 Prime Minister Sheikh Hasina told parliament that will be tried under the existing laws of the conspirators in the Padma bridge project.

Prime Minister Sheikh Hasina today told Parliament that will be tried under the existing laws of the Padma bridge project of the conspirators.

"Anti-Corruption Commission has carried out an inquiry against those who were involved in the conspiracy to create an obstacle to the implementation of the Padma bridge project," the prime minister said.

Baseless Parliament in a reply to a question on Prime Minister ACC conspiracy investigation proved the allegations of corruption in projects to be raised with the Padma bridge the World Bank said.

While party MP Kazi Firoz Rashid said in reply to a question, the Prime Minister said her government gas pipeline expansion to the availability of funds and the southern part of the country's gas pipeline, phase by phase, depending on the plan to increase.

Premier added that the Padma bridge project, Bangladesh government has a provision for the construction of a 30inch diameter gas pipeline, there has been financial.

Another question in the Prime Minister's House, said the government has made a plan to create 62,000 urban search and rescue volunteers (USARV) for the successful rescue operation, after any natural disaster such as an earthquake.

In another response to the Prime Minister also said that the government has provided 30,000 training of 62,000 volunteers.
advertisement

Dhaka division and there will be a three-operating USARV team in Chittagong, Sylhet, Barisal, Bangladesh, Rajshahi and Rangpur divisions, he said.

The fire service and the number of civil defense station in the country will be increased from 310 to 552 employees will be doubled, the Prime Minister.