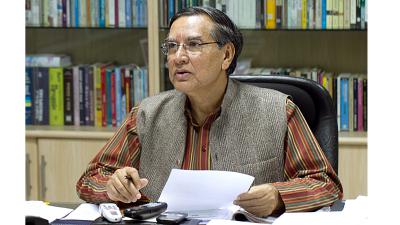 Public prosecutor Wazed Ali Khokon confirmed the issuance of the arrest warrant to Prothom Alo.
The joint secretary of Narayanganj District Lawyers Association, Mohsin Mia, filed the Tk10 crore defamation case against Mahfuz Anam for publishing ‘false’ reports in his daily about Bangladesh Awami League president Sheikh Hasina after the one-eleven political changeover.
With this case, a total of twelve more cases were filed against Mahfuz Anam in 11 districts across the country on Tuesday, bringing the total number of cases against him up to 47.
At a talk show on a private TV channel on 3 February, Mahfuz Anam made an introspective comment about a lapse in his editorial judgement in publishing some reports that the newspaper could not independently verify during the caretaker government’s tenure.
Since then, defamation and sedition lawsuits have been being filed one after another across the country against The Daily Star editor mainly by ruling party leaders and workers.
And, the language of the complaints was almost similar, saying that Mahfuz Anam published “false and distorted” stories against Awami League president and prime minister Sheikh Hasina to serve the purposes of a force that led Hasina to spend days in prison during the regime.