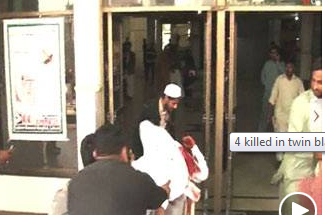 At least 4 people have been killed in an attack on churches in a Christian locality in Lahore on Sunday.According to TV reports, the explosions took place in Youhanabad area and Pak Taliban has claimed responsibility for the attacks.

Initial reports suggest two suicide bombers carried out the attacks, in which over 50 people have been injured.

There were angry protests at the blast site, with reports saying that protesters lyched two suspects.

Emergency teams have been rushed to the blast site.

The injured have been admitted to hospital.

Cops have cordoned off the area and are carrying out furhter investigations.