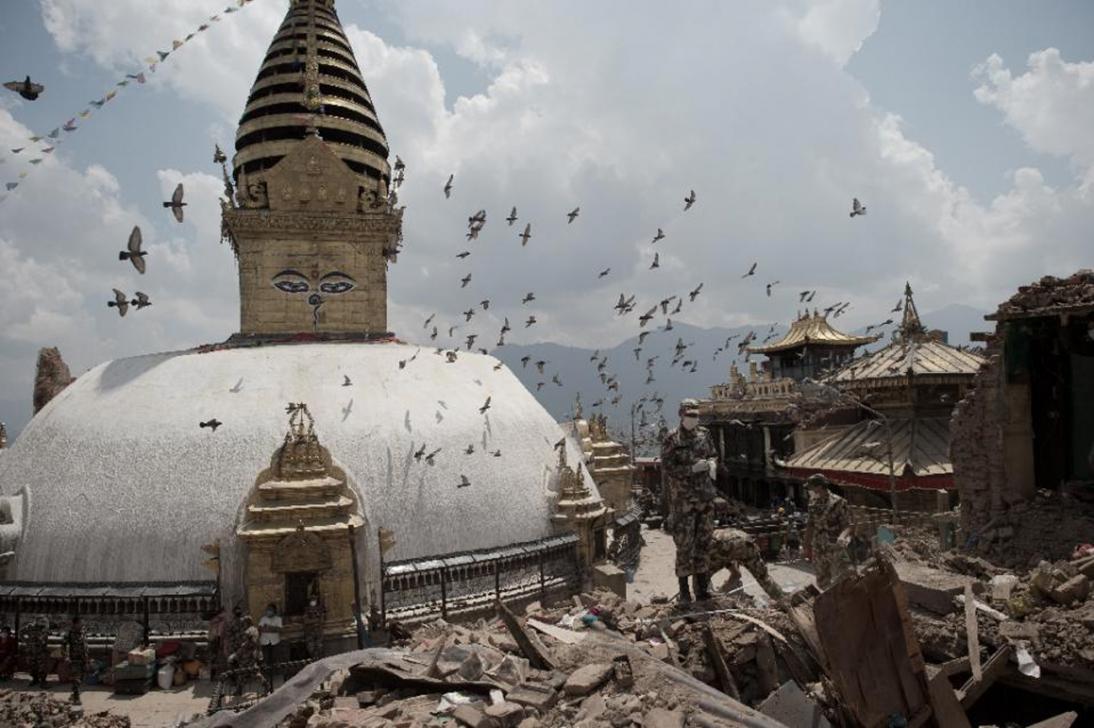 Surrounded by ochre rubble, Pannakaji beds down on a mattress wedged between Buddha statues at Kathmandu's "Monkey Temple", hoping to deter looters from the quake-ravaged site where his ancestors have served as priests for 1,600 years.

The hilltop Swayambunath Temple complex, one of Nepal's oldest and most sacred religious monuments, was partly reduced to debris by the 7.8 magnitude earthquake that struck on April 25.

Some of the seventh-century stupas remain intact and a few statues miraculously survived the disaster, but those that did now risk being pillaged by looters or desperate devotees hoping for a bit of good luck after the devastation.

"We have been priests here for the last 1,600 years, so I stay," said 61-year-old Pannakaji, who goes by one name, as he sat barefoot under a tarpaulin in a makeshift camp with 200 other temple inhabitants.

The earthquake razed the community's small wooden shacks, leaving behind a scene reminiscent of a war zone, with families salvaging what they could from the ruins -- medicines, cooking utensils and some clothes.

The temple guardians are not only worried about spending nights in make-do shelters and the threat of aftershocks that could bring down the remaining structures -- but also fear that looters may come at night to take what they can.

"I don't sleep. I keep watch. I want to stop people stealing the statues," Pannakaji said as he twisted wooden prayer beads in his hands.

UNESCO has sent a group of experts to evaluate the damage to the temple and to try to protect the unique religious site from thieves.

Archeologist and art historian David Andolfatto, who is part of that delegation, is particularly concerned about looting during Buddha's birthday celebration that takes place on Monday.

"Many tiny statues made out of clay remain intact in the ruins, and it would be very easy to take them. I worry that when devotees come on Monday they may take pieces because the temple is very important to Nepal and Tibetan Newar Buddhists," Andolfatto said.

According to the Frenchman, who says he wept on discovering the extent of the damage wrought on the temple in the disaster, 70 percent of the World Heritage site has been destroyed.

A statue of the deity Ajima, who offers protection against smallpox, stands mostly intact in one of the temple's prayer rooms, and Andolfatto is worried that people may try to take a piece of the figure in the hope it may provide protection.

The theft of art is already widespread in Nepal, and Andolfatto says that the ruins of the Monkey Temple would be a honeypot for professional art thieves hoping to sell artifacts on the international art market.

Along with a group of volunteers and experts, he is photographing and cataloguing all the artifacts as quickly as possible to thwart them.

He also hopes to persuade the Nepalese authorities to block the trade of Himalayan art globally, particularly through prestigious international art houses like Christie's and Sotheby's.

But amid all of the destruction there has also been some good news.

The site's striking centrepiece, a white-domed stupa topped with the painted eyes of Buddha survived the quake.

And inside one of the monuments, the devastation revealed a series of progressively smaller statues -- constructed like a Russian babushka doll -- that would have otherwise remained hidden.

Some unusual coins with Persian inscriptions were also found, exciting the experts who plan to have them investigated.

Despite the risk that the few remaining temple structures could collapse, no one dares make the temple guardians leave.

Tashi Phuntsok, a monk who has lived there for 11 years, chose to pitch his tent facing a panoramic view of Kathmandu and mountains -- a perfect spot for meditation.

"I stay so I can help," he said, with sunglasses perched on his nose.

The temple's namesake monkeys lounge on the steep stairs that go up to the temple, enjoying the absence of tourists, as a group of novice monks begins to clear the ruins.