For life last try to save and  review 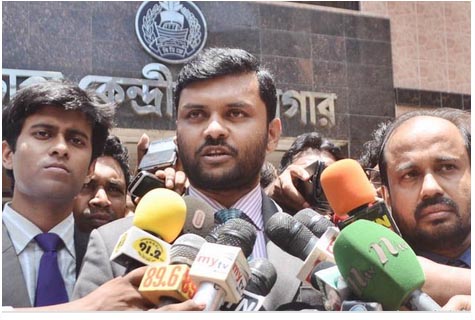 ‘A five-member team of lawyers, led by me, entered the jail at about 11:05am,’ said lawyer Shisir Monir.

The other members of the team are Moshiul Alam, Kamal Uddin, Najibur Rahman and Matiur Rahman Akand, he added.

They spent about half an hour with Mujahid from 11:25am.

The Supreme Court on Wednesday upheld the death penalty of Jamaat leader Ali Ahsan Muhammad Mujahid, which had earlier been awarded by the International Crimes Tribunal-2.

Mujahid will file a review petition against the verdict within 15 days of receiving the copy of the full judgment, said Shisir.

Mujahid told his lawyers that the reason for giving him the death sentence for the killings of intellectuals was quite undecipherable to him, added Shisir.

The International Crimes Tribunal-2 on 17 July 2013 awarded Ali Ahsan Muhammad Mujahid death sentence for committing crimes against humanity during the Liberation War in collaboration with the Pakistan occupation forces after finding the Al Badar boss guilty of five, out of seven, charges.

The charges included murder of intellectuals, genocide, abduction and persecution.

On 11 August 2013, Mujahid filed an appeal with the Appellate Division against his capital punishment in the case.